I have some data analysis and forecasting for the outbreak of 2009 novel Coronavirus, n-Cov, now re-named COVID-19.

The charts are self explanatory, all copyright David Bellamy 2020 and may not be re-published without permission. 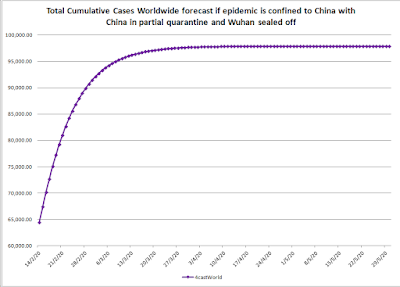 Forecast for world cases under current conditions (see legend). This effectively amounts to world deaths under the assumption that the epidemic is confined to China and principally Wuhan and Hubei Province. 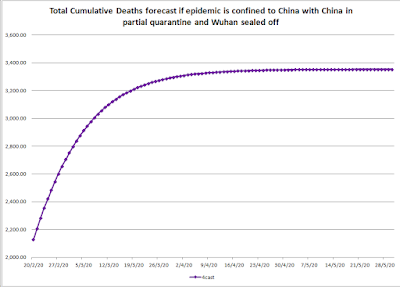 However, Daily % New Deaths are higher than daily % New Cases: 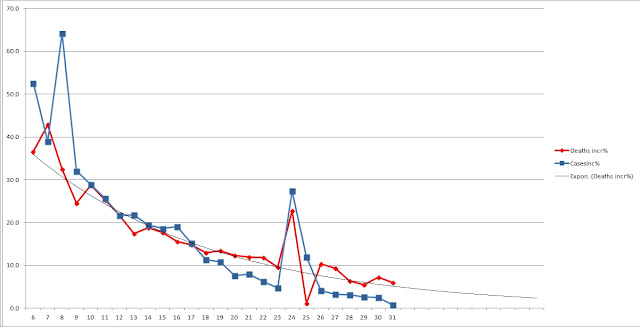 Much more data and analysis to come.

Posted by goldintheuk at 11:16 No comments:

Silver to break to the upside soon?

Watching the trading over the past few days, silver has been outperforming gold. Yesterday (Tues 16 July) in particular, gold was flat to down, whist silver was up around 35 cents. The 3-day charts on www.kitco.com clearly showed the trading for silver was stepping higher over the past three days whilst gold was within a tight trading range.

There has therefore been a down-move in the gold:silver ratio from its extreme levels of late around 95:1. A gap in fact. Will this gap be "filled" as many like to predict in these instances? Is a gap in a ratio like this as valid as a gap on the open in a stock and how about in commodities like these where there is nearly 24 hour trading - although I guess stock futures trade out of hours too? I cannot tell. 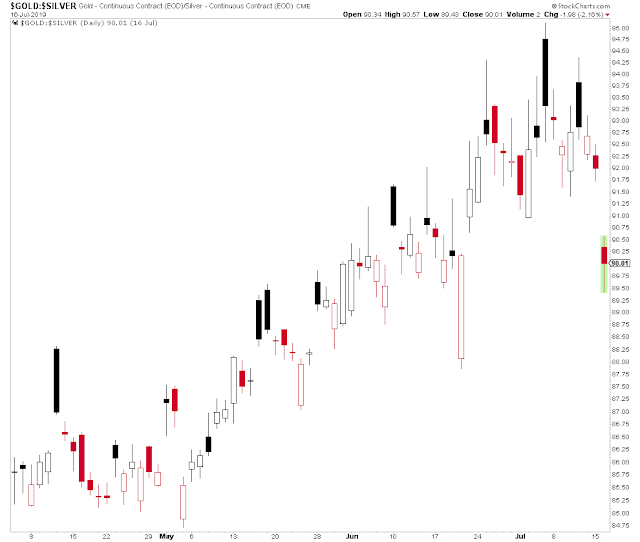 Posted by goldintheuk at 12:51 No comments:

Gold green in all currencies often.

It's always nice to look at Kitco's gold in currencies table and see all green.
Bitcoin is strategically placed just underneath this table to make goldbugs envious: 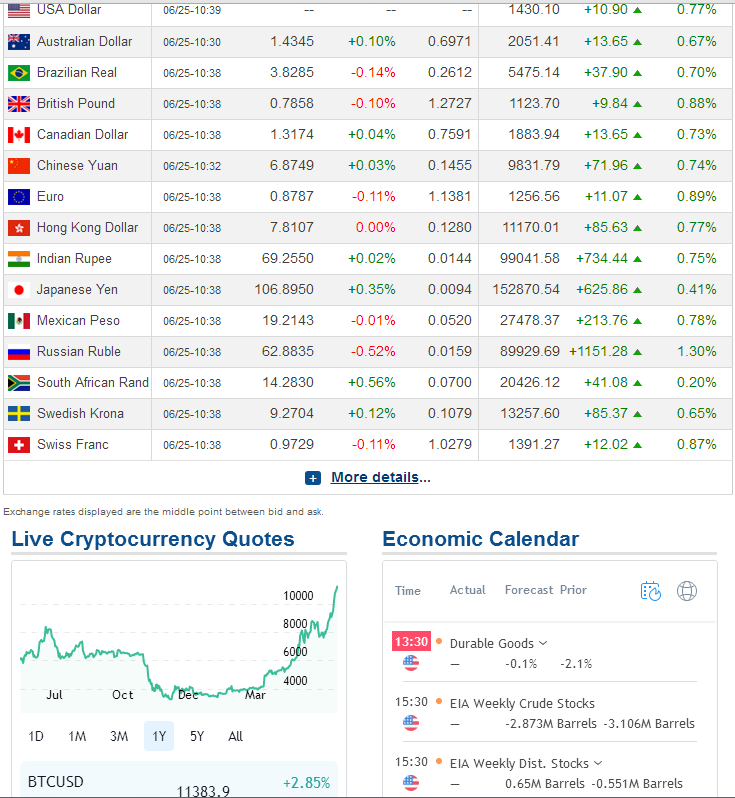 I now see that I had not been watching this chart for some time - I just went to look and there it is. Coincidental with $1400 gold.

Posted by goldintheuk at 12:14 No comments:

Gold breaks out from long term resistance levels - at last!

After giving very little to write about for several months, gold has made a most unusual move for the period around the start of summer.

Almost undoubtedly, the announcements from the Federal Reserve regarding the potential of interest rate cuts and at least the ceasing of interest rate rises for the time being have played into this, although a rally was already underway. Geopolitical factors such as the Iran/US conflict brewing in the Straits of Hormuz have also played a part.

The two charts below show the various resistance lines in play in gold priced in US dollars and GB Pounds Sterling.

In British Pounds, he chart is more perky.The resistance zone at £960-£1005 has already been cleared. In fact, all of the trading since the gold price jump on the Brexit vote on 23 June 2016 has been around that very zone. The peaks from the bear market region (where the price dipped as low as £693) have long been taken out and left behind as gold has been trading around £1000 for three years:

Taking a look at a 20 year chart, I have marked some times when decent up-moves have occurred in gold priced in US dollars.
The only times when decent rallies have occurred in the summer were 2000, a bounce in 2008, (2011, 2012 and 2013 rallies were later in summer), and 2016. There has been little positive early summer action in gold during the entire bull and bear market cycle since 1999. This illustrates the "outside the norm" nature of this current move:

Posted by goldintheuk at 08:58 No comments:

Gold at back-test of pitchfork failure line in USD and also at resistance in GBP.

Gold is very close to its back-test of pitchfork failure line from a pattern in force since 2015. Maybe it already happened. Maybe a push to around $1250 would complete it:

It's always difficult to nail these patterns exactly, since it depends if you take daily or weekly charts and if you take intraday or closing prices as the pivot points.
The weekly chart says the high might already be in:

A little mischief with the above chart might suggest a $970-980 target:

Meanwhile, back at the ranch, gold in GBP (pounds) has just nudged to or into the resistance zone above 960; another back-test perhaps? Coincidence?

Gold broken down from long term bullish structure since 2010/2011

Gold has broken down from long term bullish structure since 2010/2011.

It looks bad. It looks awful, in fact. The 2016 bull market run could be over according to this - or very nearly.

$920 is the level that comes from a channel doubling of the blue pitchfork, which makes geometric sense and would of course be a new bear market low.

Possibility of a rally to re-test (to back-test) the $1235 breakdown at the bottom of the fork but maybe it has been back-tested already on a smaller scale (upper chart). The gross oversold condition right now might indicate a technical rally. It would be interesting to see if any such rally could make it to $1235+.

The $1235 area was mentioned on an interesting YouTube video here from Alessio Rastani of leadingtrader.com (from Elliott Wave analysis)